Mission & What We Do

To connect families to resources and community by providing reliable transportation for seriously ill children and pregnant women to essential healthcare.

Volunteer drivers provide rides to medical appointments for children with a serious health condition, pregnant women, and for parents with a baby in the NICU if no car is available.

80% of pediatric care takes place in the outpatient setting.

In Greater Lansing, 70% of the children who rely on the local subspecialty clinics for treatment of serious health illnesses are on Medicaid. Poor transportation options contribute to their missing 60% of their medical appointments.

To address this, well-trained and highly-screened volunteer drivers give rides for:

More Than Just a Ride

In addition to providing free rides to medical care, volunteer drivers are a connection for families who often feel highly stressed during a health crisis. Having a connection to the larger community helps families feel less isolated and a little more supported.

History of The Davies Project by Founder Pam Miklavcic

When my oldest of four children, Peter, was 3 years old, we went to New England to celebrate the holidays. On Christmas Eve, Peter spiked a fever of 105 that was impossible to lower with any kind of medication. We cooled him as best we could in the bathtub, cuddled with him to calm him down, yet grew increasingly frightened as he sobbed with what turned out to be bone pain during the night. As quickly as we could, we returned to Michigan where Dr. Susan Burke diagnosed his symptoms quickly and accurately. We learned afterwards that most doctors would have told us Peter’s condition was likely viral and to wait it out–by which time the cancer could have spread to his spinal column. In retrospect, we were very lucky. Regardless, by now, 95% of Peter’s blood consisted of cancerous blasts.

For the next three and a half years, Peter received regular doses of chemotherapy and intrathecal injections into his spinal column. On several occasions, we feared we would lose him.

Fortunately, our story has a happy ending. Peter is now working on a Ph.D. in mechanical engineering.

As a result of everything we went through and what I saw other families go through, I resolved to do what I could to help other families and children with serious health conditions have happy endings.

As part of this resolution, I worked for a few years with Dr. Dele Davies who was at MSU and led the Children’s Health Initiative. When the focus effort of that changed, a group of wonderful community leaders worked with me to launch what is now The Davies Project. 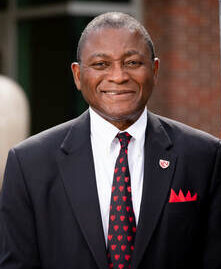 This project was named to honor Dr. H. Dele Davies, who served as chair of the Department of Pediatrics and Human Development in the College of Human Medicine at Michigan State University (MSU) for more than nine years. During this time, he provided exemplary values for service, love of children, and outstanding administrative and mentorship skills. By promoting his values, he made invaluable contributions not only to his department, but also to the College of Human Medicine and to the community at large.

While in Lansing, Dr. Davies always recognized the outstanding faculty and staff he worked with for their admirable commitment and dedication to the field of pediatrics. He was also passionate in engaging the community–including Sparrow Regional Children’s Center and lay and business groups within the Greater Lansing region–to come together around a shared vision. This fostered a more integrated, coordinated, multi-disciplinary outpatient system of pediatric care for local children.

Originally from Nigeria, Dr. Davies has lived in England, Canada, and the U.S. since age 15, and has traveled to more than 20 countries. At each stage of his journey, he learned that a clear vision, hard work, and respect for others are the fundamental building blocks of both individual relationships and organizational success.

Dr. Davies believes in the compatibility of faith and science. His book, entitled The Real House of God, guides readers in understanding how, as human beings, we possess a soul and a spirit in addition to our physical presence.

Dr. Davies and his wife, Arike, have three children — Daniel, Joshua and Lademi. They reside in Omaha, NE where Dr. Davies is Senior Vice Chancellor at the University of Nebraska Medical Center.

“To everyone at The Davies Project. We wanted to show our appreciation in some way. You’re the best thing that has happened to our family. Words can’t express how you all have truly, deeply, touched our hearts. We thank you.”
– Family member